One of the biggest perks of staying in a luxury villa is the privacy. 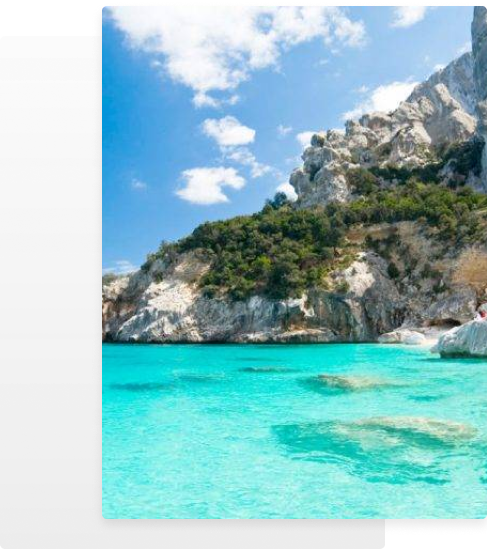 Sardinia has a long history of being subject to impressions. The Greeks called it «Ichnusa», or «footprint» — when Zeus created the earth, he gathered the leftover pieces, threw them into the sea, and stepped down hard:

Intruders have been leaving their footprints ever since: Phoenicians, Romans, Pisans, Catalans, billionaire yachtsmen, crabby and indolent writers.

And yet somehow it has retained its thorny, intransigent particularity — «lost between Europe and Africa, and belonging to nowhere», as Lawrence put it. It’s that very betweenness, at once central and marginal to history, that drew D. H. Lawrence, in exile from England, wrote «Sea and Sardinia», about a visit there in 1921. 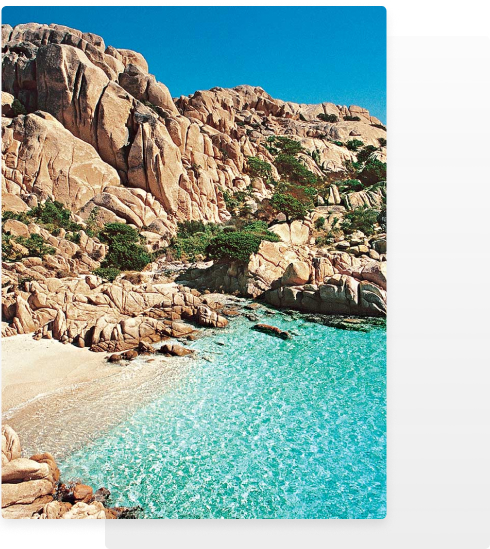 Follow Lawrence’s ink-trail around the island: from Cagliari in the south, through the Gennargentu Mountains, and up to Olbia on the northeast coast. It is a scrubby, serpentine route, full of breathless switchbacks. But then the same holds true for Lawrence on the page: You’re always veering giddily from fleeting exaltations, the joy of motion, the wildness of the landscape, the generosity of a peasant, to tedious exasperations (almost everything else).

The colour of the sea ranges from turquoise to emerald green, the surrounding landscapes seem painted, the rocks are sculpted by the wind and beauty and charm are waiting to be revealed to the World 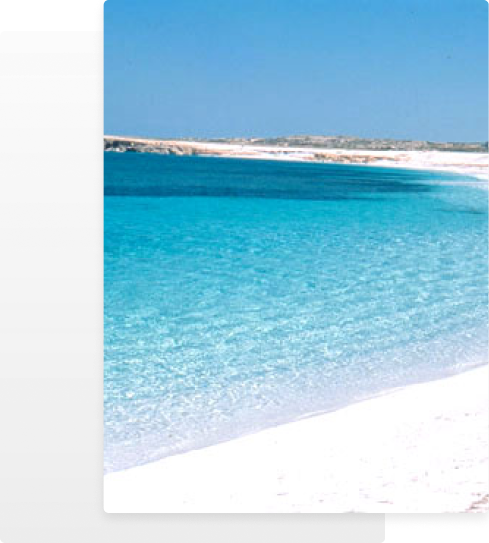 Is Arutas beach (Spiaggia di Is Arutas) lies just below Mari Ermi beach, faces due west in the direction of Isola di Mal di Ventre, and has a length of 500 meters. The beach — entirely covered by sands of white and pinkish quartz — is located in the north-central part of the Marine Protected Area of the Sinis Peninsula. Slightly more to the north of Is Arutas, there is a «twin» jewel: fine golden sand with tiny pebbles of white and pink quartz characterise Mari Ermi, whose multiple ever-changing hues cover two and a half kilometres, all the way to Porto Suedda, where rocks appear, hiding another small beach.

In front, you will notice the characteristic shape of the Mal di Ventre Island, a protected natural paradise where sea turtles lay their eggs and in whose depths several wrecks of different time periods abound. Going south, before the ancient town of Tharros, where you can combine a day at the beach and a fantastic archaeological visit, you will find the Maimoni beach, it, too, with light sand sparkling with quartz fragments. 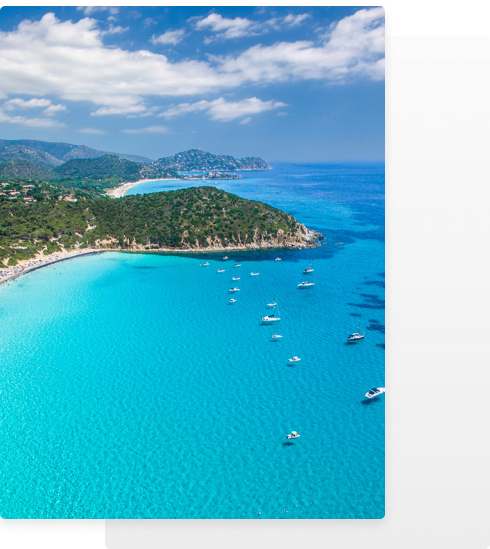 Mari Pintau, in Sardinian language meaning «painted sea»… The name says it all! It is located in the south, about 20 km from Cagliari towards Villasimius and belongs to the town of Quartu Sant ‘Elena. The road, though it is full of curves, offers a wonderful view from which you will discover other small coves and beaches during your trip. The beach is primarily made up of quite large round stones to the shore, and the funny thing is that once in the water, they become very fine white sand. So we recommend wearing rubber slippers, you can leave them on the shore before you dive. 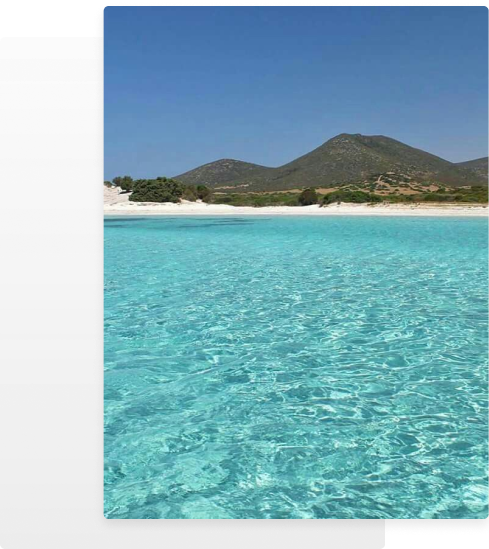 A natural masterpiece to be admired from a distance. Cala Zafferano is a daytime dream of a holiday by the sea. Like dreams it is fleeting: a corner of paradise within the military area of Teulada. One can reach it only in July and August, only by boat, from the delightful beaches of Tuerredda and Porto Tramatzu. Its isolation contributes to the sensation of a place out of this world. There are not limits to the memories it leaves: it is a half-moon of white and fine grains with soft hints of pink thanks to the fragments of shell left by the waves. The soft sand is immersed in shallow waters with infinite shades of aquamarine. The mountains behind echo the outline of a sleeping woman. 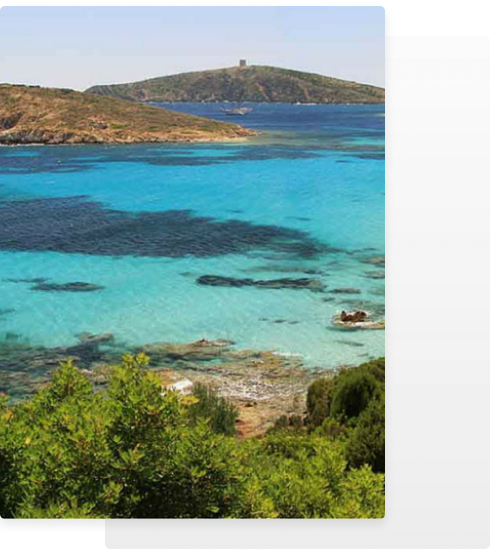 You should fully enjoy this other marvel of nature. The sand is beautifully white and soft, while the sea is green and turquoise with clear and shallow water for dozens of metres. And it is, so to speak, the ’city beach’ of Teulada, although there are a few kilometres separating the two. In front of it the rocky profile of Isola Rossa stands out, covered in Mediterranean scrub. You can walk to it, with no need to swim, because the sea is not deep here. Part of the beach falls within a military area, but can be used in the summer months. 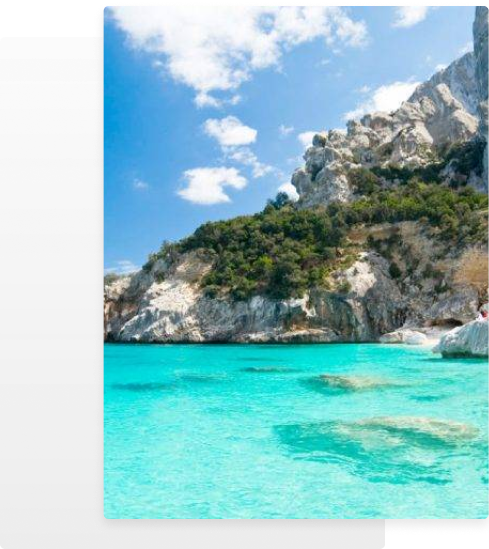 The beach of Cala Goloritzè is located in this context: smooth, white pebbles; transparent, turquoise waters — the result of underwater karst springs; marble rocks shapedover time by the weather and a shallow seabed. It is one of the most beautiful little coves in the whole of the Mediterranean and has become a national monument. It is a magical place, not to be missed during a visit to Sardinia and is often considered a symbol of the island. In 1995 it was elected «Italian National Monument» and it is the most photographed beach in the Ogliastra area. The bottom is clear and 30 m. high. The white pubbled beach is unique of its kind and its waters colder than normal. 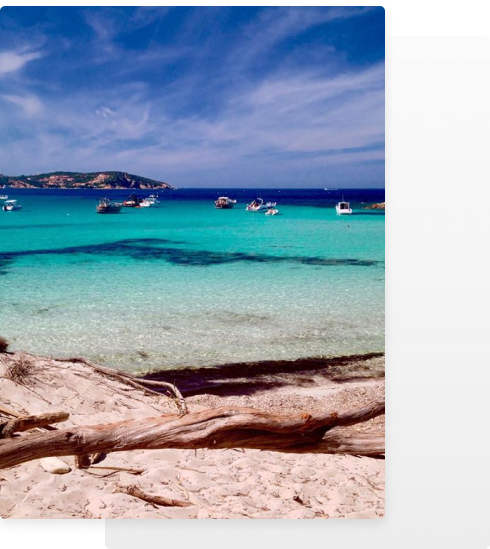 The Pevero beach is located at only 3 km from Porto Cervo, along the popular and beautiful Emerald Coast. The beach is characterized by a fine and white sand, clear water and a not deep sea bed, which make the beach the right place for families with children. It is also one of the most favourite destination of vip and paparazzi… Rocky outcrops emerge from some stretches of the shore, while a low Mediterranean vegetation dominated by junipers surrounds the beach. Behind the Grande Pervero beach there are the golf courses that make the area a popular destination for golf lovers from all around the world.

Enjoy days of complete relaxation in one of the pearls of Caprera, stretched out on soft sand, immersed in crystalline sea, protected by granite rocks covered in Mediterranean brush. 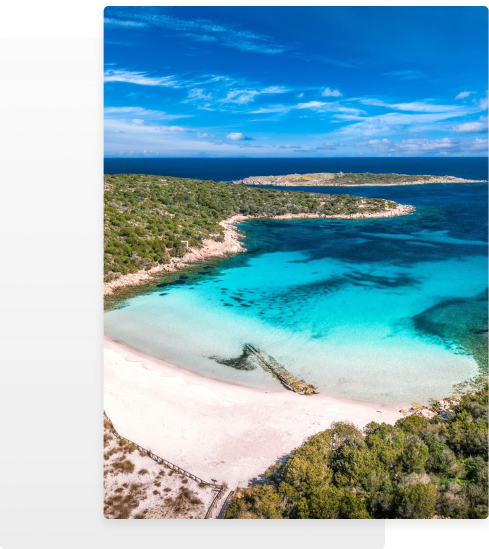 One of the infinite tiny coves that jewel the Maddalena archipelago, in the far northeast of Sardinia: shining sand that shifts gently under the transparent waters, surrounded by white rocks clothed in Mediterranean brush. 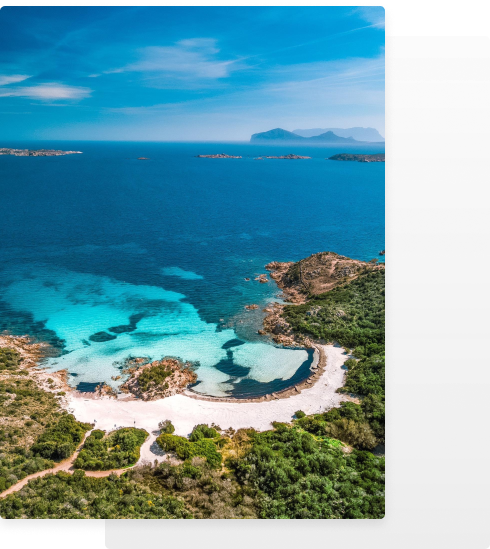 The Spiagge del Principe (Prince’s Beaches). An Ishmaelite Prince arrived, by chance, from the sea, at the natural fjord of Porto Cervo and was bewitched by what he saw. It was the end of the 1960s: it was love at first sight between Karim Aga Khan IV, Arab prince and Muslim imam, and a stretch of the wild and beautiful Sardinia, a rough diamond enshrouded in the fragrances of the Mediterranean scrub as it moves down from the mountains towards the sea and frames the enchanting beaches.

His favourite beach became the Spiaggia del Principe (Prince’s beach), a stretch of white sand surrounded by breathtaking scenery, behind a deep cove protected by a pink granite promontory. Exclusive for its beauty, but open to all: in just a few minutes on foot, you reach the green, pink, turquoise and blue heart of the Costa Smeralda, the new name that the Prince gave to this part of Gallura.

Principe Beach is divided by rocks in the middle that stretch out into the ocean, and is about 250 meters long in total. Principe Beach is a nice spot for snorkelling, as several species of small fish swim quietly in its shallow waters. A small bar serves lunch, ice cream and cold drinks. Spiaggia del Principe shouldn’t be missed by those visiting the Costa Smeralda, but it can get a little crowded in August, so you may want to go early. 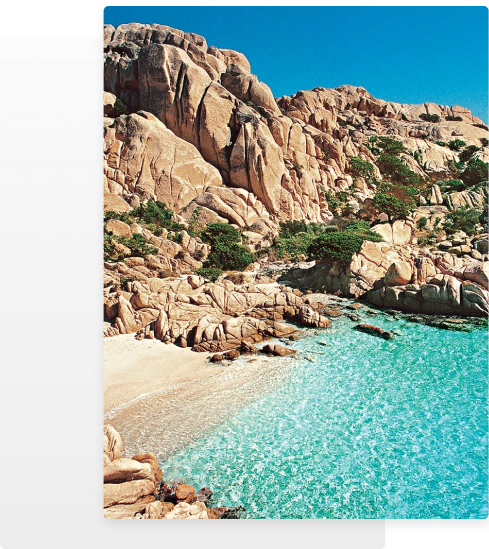 Cala Coticcio — the nickname of the beach, Little Tahiti, introduce us to the pure beauty of this place: clear turquoise water, white sand with surrounding rose-coloured cliffs and Mediterranean scrub. It is undoubtedly one of the most beautiful little coves in the Maddalena National Park. It has fine, almost dazzling white sand and the colours of the crystal clear sea are framed by rose-coloured rock and the shrubs of the Mediterranean scrub.

It is environmentally protected and can be reached via sea, in boats with organized trips around the archipelago and also via land, along a partially unpaved trekking trail through the rocks. This is a tiring walk, requiring gym shoes and a good supply of water, but at the end of the last, rather steep part of it, you will be rewarded by the sight of the iridescent reflections of the sea. You will be able to admire the stunning seascape, with its bright colours and background of impressive rocks, and enjoy relaxing in the peace and quiet it offers you. Then you can delve deep into the nature reserve: an authentic aquarium with numerous species of fish and starfish. It is ideal for snorkelling enthusiasts. The «Sardinian Tahiti» is undoubtedly not the only gem along the coast of Caprera. 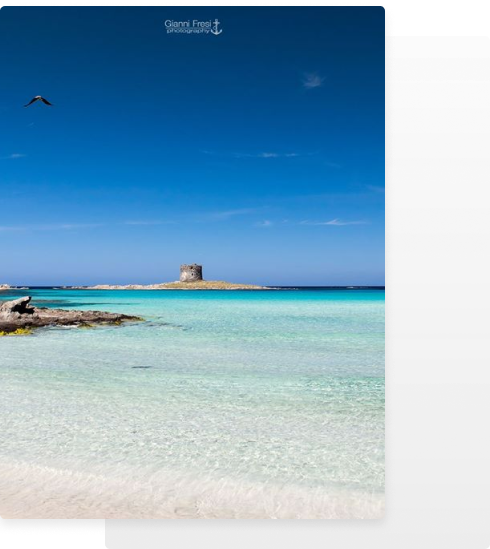 Fine, pure white sand, a transparent seabed, ankle-deep water for tens of metres, turquoise and blue colours of a sea that blends with the sky and a captivating landscape offered by the surrounding towers. The beach of La Pelosa lies between the Capo Falcone sea stacks, the Isola Piana island and Asinara, which protect it from the force of the open sea: it is a tropical paradise that will make you feel like you are in a film. This is how tourists from all over the world, after having visited it, define this perfect environment with its natural and historical elements competing with each other.

If you choose to stay in the north of Sardinia, a visit to this place is a must. It will leave its mark, forever, on your mind and your heart