One of the biggest perks of staying in a luxury villa is the privacy.

«A land of longevity, cradle of food and wine traditions with a simple and marked character, when it comes to flavors Sardinia needs no introduction»
— founder Oksana Syrotyuk

Sardinia is an island in the Mediterranean Sea, yes, it’s a part of Italy, but no, the people who live here aren’t Italian — they’re Sardinian. And don’t call them otherwise. Francesco Cetti once said, «There is not in Italy what there is in Sardinia, nor in Sardinia what there is in Italy.»

Agriculturally, people make their living here running small farms that have been passed down for thousands of years, fishing the sea, or working in the fields herding animals. Adapting to this borderline-barren land over thousands of years has made the Sardinian people to be hard workers and proud — and with reason.

The abundance of sunlight and a pristine environment bestow unique and genuine flavours to our products from the land and sea. Close your eyes and start savoring… 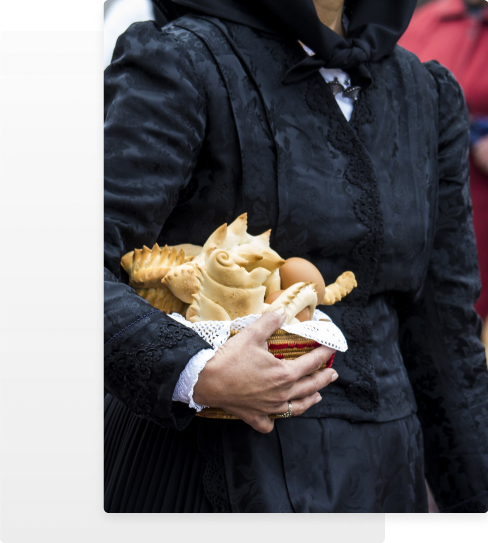 There are about 400 types of Sardinian breads, coming from different regions, although I only got to try a couple. The most typical is pane carasau, which is a circular, thin, crisp flatbread. Apparently designed for shepherds to take with them when they tended their flocks, it can last for a year and is often served just with extra-virgin olive oil and salt. It becomes pane frattau when it’s soaked in lamb stock and spread with tomato paste and grated pecorino cheese before being topped with a semi-coddled egg and rolled into a thin cigar.

Another sample of the Amazing Sardinian Art of Decorated Breads — Pane Coccoi: The designs recall ancient symbols from the many cultural influences in Sardinia. The shapes include the crown, wreathes, the chick, a girl, doves, fish, small baskets, fruits and flowers. Especially for Easter, whole eggs are incorporated into each design, sometimes hidden but often exposed within the design theme. These breads are considered symbols of fertility and good luck. When you look at the intricacies of these artisinal breads, it’s surprising to think the only tools used are a small knife and scissors. Two interesting shapes are called Sa Pippia and Lazzaro. Sa Pippia is a doll-shaped bread with seven legs, one for each day of the Holy Week. This bread was used as an Easter Advent Calendar, one leg given to a child each day leading up to Easter Sunday. Lazzaro represents the body of Lazarus wrapped in a shroud, a symbol of resurrection. 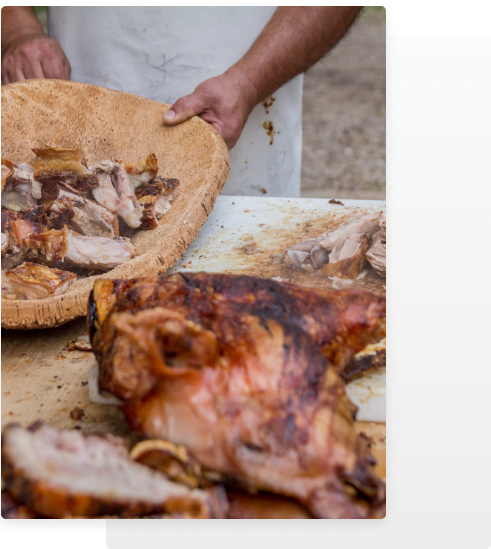 The suckling pig or «porcheddu» must weigh from 4 to maximum 6 kilograms and should be cooked entire with myrtle leaves for some hours and then served on a cork tray. Its diffusion as a typical dish of traditional and tourist menus is actually quite recent. Before the last 40-50 years the Sardinian spit roasted pork was, as we have remembered, the dish of great occasions, perfect to bring to the table for Easter or for some family occasion. This was also due to the fact that not everyone could afford the «luxury» of eating pigs as a child, since — as an adult — the pig became an extraordinary resource for the family, giving meat, sausages and other products, perfect to fill the dispensation of the house or, possibly, to be sold or exchanged. 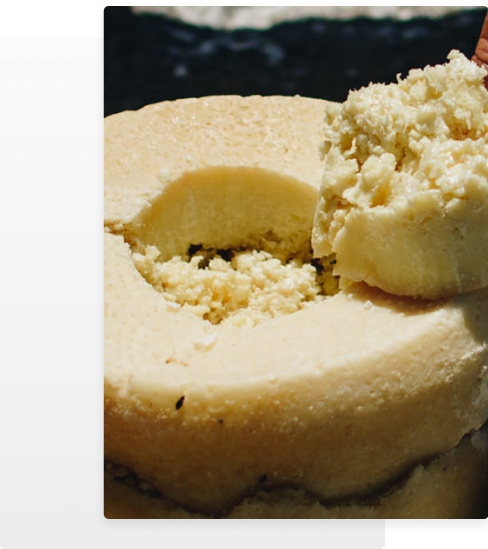 A typical cheese from Sardinia, it also has the slightly alarming name of the cheese with worms. Actually Casu Martzu is the goat that is colonised by dairy fly larvae, whose eggs then hatch into larvae that feed on the cheese. Only when the cream and larvae ratio is two to one can the cheese be consumed, along with the worms.

If you do want to try this, you’ll have to do a deal on the black market because it’s now banned: for health and safety reasons. Obviously.

The main event when it comes to cheese in Sardinia is pecorino — sheep are everywhere, and this is a type of hard sheeps’ cheese. I often use it in cooking instead of parmesan, even the more mature (staggionato) is less hard. My favourite pecorino is Fiore Sardo — the older the better. Sardinia also produces other sorts of cheeses: very good mozzarella; an excellent goats’ cheese a bit like feta, white, soft and salty, is casu ‘e fitta, generally added to soup; and casizzolu, Red cows’ milk cheese. 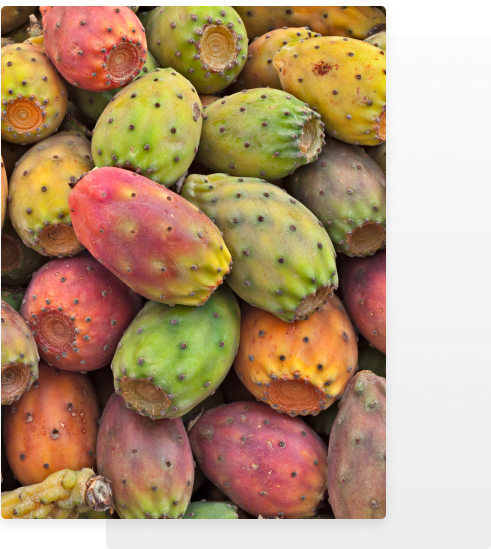 (prickly pears or literally, figs from India). Sardinia is very dessert-like, so there is cactus here, which are actually farmed here as well for their fruits — also known as prickly pears. You can buy them in the local supermarkets, or pick one yourself off a plant on the side of the road. The fruit itself is juicy and sweet — kind of tastes like a pear and a strawberry mixed together, but, the thing that makes this fruit strange is just how difficult it is to eat. As you hold it, you need to be sure not to be stuck by any needles. Once you get past that initial part without physically injuring yourself, the fruit inside is full of these little hard and BB-pellet-like seeds that you shouldn’t eat.

«Life is a combination of pasta and magic.» — Federico Fellini

and so it is in Sardinia… 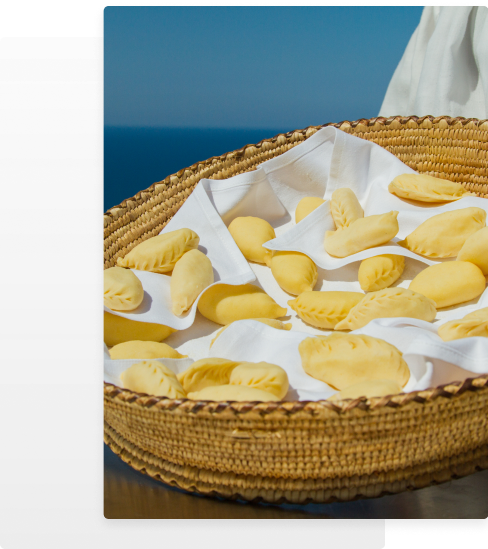 There are two types of pasta which are very typically Sardinian. We especially suggest fregula, made of semolina and rolled into small balls. The toasting process gives it a slightly nutty flavour. There are plenty of recipes for cooking fregola but the most delicious is definitely a seafood fregola: with clams, prawns and served with some saffron broth and a loaf of crunchy bread. It is also used to make soups.

Fregula is where the North African influence is more obvious, being similar to cous cous, but with larger grains. The other kind of pasta peculiar to Sardinia is «Su Filindeu» or Filindeus: since the BBC English TV came to Sardinia to learn about this incredible pasta, these «threads of God» are considered the rarest pasta in the world, linked to the religious tradition of St. Francis of Lula, a Barbagian village. A three hundred years old technique handed down from mother to daughter to these days. Laborious, particular and complex, the preparation of Su Filindeu starts with a simple dough of durum wheat semolina, water and salt. When the dough is ready, it is pulled between the two hands folding it eight times, until it separates into many small filaments. These are placed in three layers, crossing the lines to get a fine and subtile mesh. Then are laid in the sun where they dry out by sticking one layer on the other and obtaining a precious pasta web, which smells of grain, of sun, of holiness. At the feast of Saint Francis, the pilgrims are offered a broth made with sheep meat in which this wonderful Slow Food Presidia is cooked. Its difficult preparation has made it the rarest pasta in the world, as most chefs tried to learn this ancient craft of preparation but were not able to complete the task.

The food and drink is sure to be a highlight of any holiday in Sardinia. 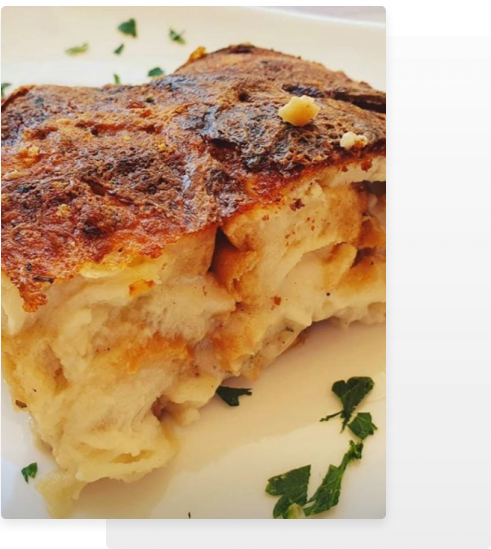 The word «zuppa» means soup, but actually it is not a liquid dish, although the broth is used to prepare it. The consistency is similar to that of lasagna. Used in the past as a first course for both the lower classes and those high, the soup was the main dish of all marriages of Gallura.
Slices are soaked in lamb stock, sprinkled with pecorino cheese and fresh herbs, layered in a shallow dish, and topped with slices of cheese before more stock is added. It’s baked in the oven until the cheese has browned and comes out like a cross between lasagne and cheese on toast — perfect for hungry shepherds. 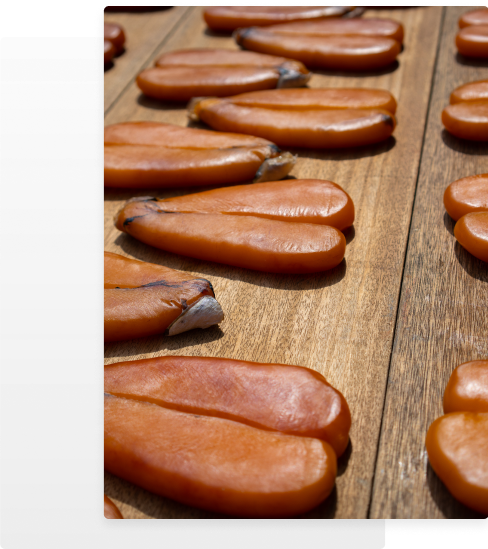 Or butàriga in Sardinian language — is made of salted and cured fish roe. The roe can come from swordfish and tuna, but the flathead grey mullet’s roe is the most common one. It’s very salty with a strong fishy taste — a bit of an acquired taste. It’s usually sprinkled or grated over fish and seafood, risottos, pastas, and bruschetta. 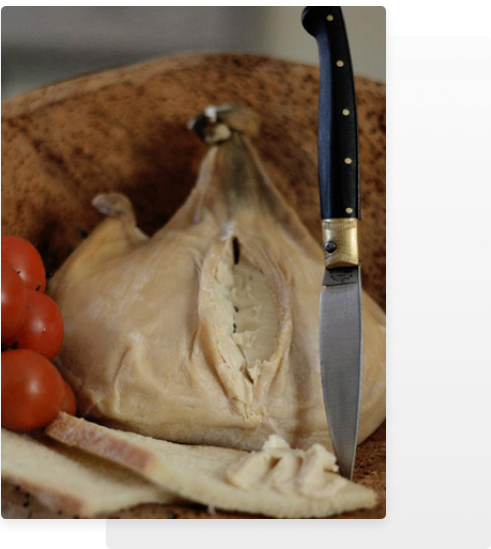 One of the oldest cheeses in Sardinia, this unusual cheese is made with the milk found inside of the stomach of a baby goat that did not eat any grass during the first months of its life. In order to get the proper creamy consistency before being ready to eat, the stomach is usually knotted and hung up to dry perfectly.

Or «seada» in sardinian — is a traditional sardinian dessert made of a very fresh and mild pecorino, but fresh cow-milk’s cheese, such as su casigiolu, can be used as well. Cheese freshness is very important. We say that a good seada cheese should filare. It means that the cheese should melt during cooking, but not too much. The right consistency should allow to stretch upwards the cheese filaments with the fork. We recommend you to choose orange blossom honey or wildflower honey to taste this wonderful dessert. Seadas comes probably from the word seu (lard in sardinian language). 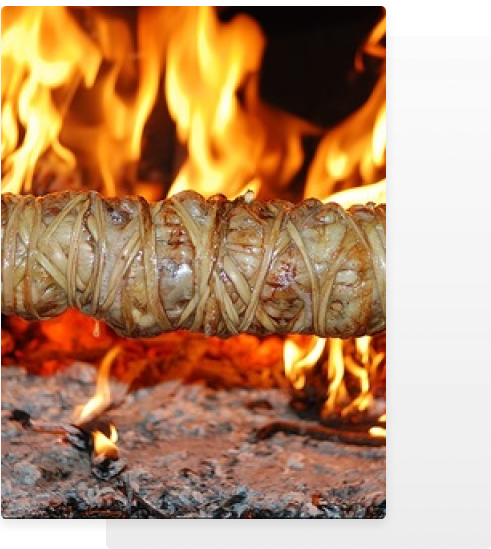 Treccia means braid, and it is named after the shape and appearance of the final product. The original name for this food is cordula. It is really complicated and time-consuming to prepare this recipe, but it is worth it. Basically, the organs (liver, pancreas, heart and glands) of a baby goat are kept together by a big skewer and the intestines are entwined around it.

Twice a year, once in spring and once in winter, families gather in outdoor verandas (sa lolla) to cook and eat all day long. The women busy themselves with the direction of the meal and work assiduously on the preparations of various delicious antipasti, homemade ravioli, sauces, desserts. Children run throughout the house and gardens, happily ignored and free to pursue their outdoor amusements. And the men begin to argue over how to butcher the animal.

The braiding of the intestines around the other organs is spectacular and difficult. Once it is finished, sa cordula is also skewered and roasted on its own open fire. And the men relax, the children resume their play, the first drinks are poured, the grass grows, a slight wind blows, the wasps hover over the abandoned space where the butchering was done, the hills sprout their first or last flowers and Easter or Christmas comes and goes once more.

Sardinian cuisine is still very similar to the way it was many centuries ago, while differing between the various territories and preparation techniques. Whether on the coast or inland, Sardinia’s delicious specialities, based on simple and genuine ingredients, with strong yet delicate flavours, never fail to amaze you.

Just as you loosen your belt, wondering if you have space for dessert, I thought I’d mention that Sardinia is one of the world’s Blue Zones — where the locals have unusual longevity. Some people attribute this to the food as well as the lifestyle.